In 1897, the famous historian and genealogist Adolf Pawinski published a book gathering documents from the 16th century: Liber Quitantarium Alexandri Regis ab a. 1502 ad 1506. The subtitle “Ksiaga skarbova krola Aleksandra Jag." translates into Royal Treasure of King Aleksander Jagiello. This book gathers several documents collected by the author. They record some activities of the royal treasure, including grants and privileges.

The texts from the 16th century were written in latin by several authors. For a better restitution, Pawinski kept the original writing. Andrzej Książyk is mentioned several times in these documents. He is also listed in the Index Personarum with other officials who served the King.

The reading of the texts highlights that during the early 16th century, many names had unstable or approximatively spelling. The royal chronicles mentions Andreas Książyk, Andre Xianzyk and Andree Knyazyk . Two genealogy experts in Warsaw (Biblioteka Narodowa and Glówne Akt Dawnych) confirm that these alterations refer to the same surname Książyk. They also specify that archaic names Xsiążyk, Xiążyk, Xionżyk and Ciążyk can also be found in old documents.

The Digital Library polona.pl proposes a digitized version of this book. In the pages of the Liber Quitaniarum, there are 3 mentions of Andrzej Książyk receiving presents and money from the Royal Treasure. The text specifies that Andrzej has received about 8 aunes (9 meters) of a precious fabric from Florence. He has also received a 12 marksin  compensation for a loss caused by the Jewish collector Stephanum Fissel.

Stephanum Fissel is identified as Stefan Żiszel. In his article Skarbowość polska za Aleksandra Jagiellończyka (Kwartalnik Historyczny, R. 23, 1909, z. 1, s. 30. 9), Jan Rutkowski specifies that Stefan Żiszel is a "Jewish general collector from Kakowa" who operated "all over Wielkopolska" in 1504-1505. According to Piotr Tafiłowski (University of Warsaw), Stefan Żiszel-Powidzki was a converted Jew from a prominent banker family in Krakow. He married a woman from the family of Chancelor Jan Łaski.

This element about Wielkopolska highlights the likely presence of a Książyk Family in the region before the early 16th century. Our researches will investigate this point further. 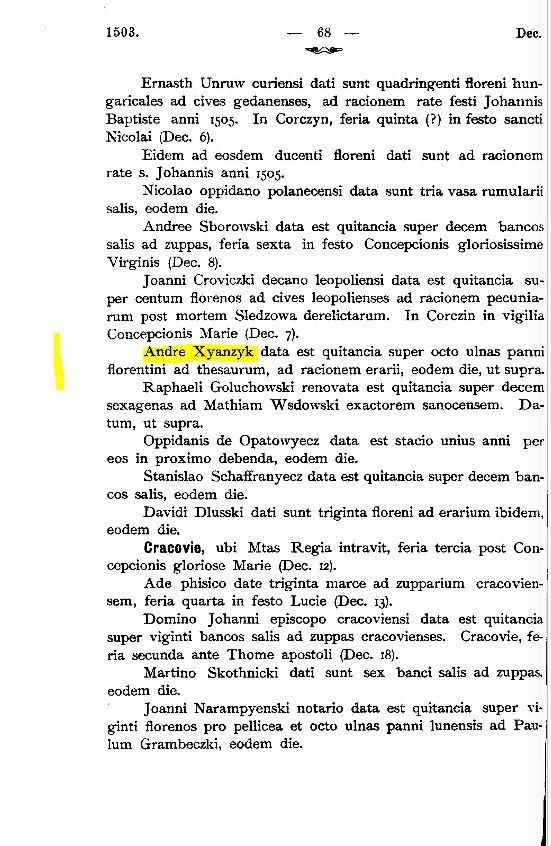