Our name Książyk is non frequent, unpronounceable, difficult to spell and impossible to remember. Still, nobody can forget an individual with this name. This make all of us, whatever our Polish, French, American or Canadian citizenship proud of our origins. Our name Książyk is not easy to pronounce for non-Polish speakers. The most usual confusion is made with the family  name Książek because in Polish, the letters Y and E sound very close. Here are some tips to help you articulate better. An expert from the Biblioteka Narodowa in Warsaw suggests that the Książ root of our name might derivate from older forms such as Nordic "Xønsze" (1393) or Slavik "Xansz" (1359). The orthograph of family names (nazwiska) remained unstable until the late 19th century. Sometimes, a parish register can even mentions siblings with different name spelling. In addition, the partition of the country during 126 years (1792-1918) did not help with the domination of German and Russian languages that introduced many orthography alterations

Książyk is no exception. During the early 16th century, the register of the Royal Treasure mentions three variations for one single person: Andreas Książyk, Andre Xianzyk and Andree Knyazyk. Experts from the Biblioteka Narodowa and Glówne Akt Dawnych in Warsaw confirm that many other alterations can be read (chart below). Our name Książyk does not relate to a specific meaning. Non polish-speakers can also make confusions with some other words, usually declinations of książka (books) or ksiądz (priest).

The closest word might be Książe (prince). In Poland, names ending with "yk" mean "son of" or “little”. Only 4,2% of Polish last names are ending with the suffix "yk". In such case, our name would mean “little Prince”. Another etymology refers to Książ Wielkopolski, a small town located in the Śrem District. Książyk might be the last name for someone living there. About 8% of Polish last names have geographical origins. This theory makes sens considering that many Książyk families lived in this area before the years 1870s, in particular in Wyrzeka and Nowe Miasto nad Wartą. Today, some Książyk families are still located in the region, most of them in the nearby Kościan District.

There is also a town Książ in Low Silesia (formerly Fürstenstein). Indeed, in this region there were many Księżyk Families, mostly located in the Gliwice area. But there were only a few Książyk. Obviously, in this local theory, Książyk would be an alteration of Księżyk. 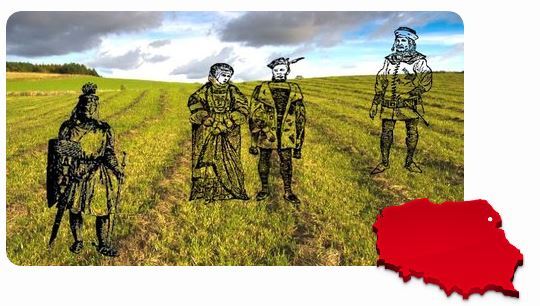 Historians and genealogists explain that several centuries ago, people used nicknames to differentiate brothers or cousins inside a same clan or family. Nicknames reflected physical characteristics, a location, a provenance or a profession.

Regarding our name, genealogists and local historians from the Podlaskie Region explain that Książyk is a branch from the Niwiński Family. Maybe one of our ancestor considered himself above the others. Maybe he had a lavish way of life. Maybe he was granted some privileges. Whatever the cause, his “little prince” nickname became a family name.

The first record of Książyk as a family name is mentioned in the register of the Royal Treasure for the period 1502-1506. Herbarz record that a few years later, Maciej, the son of Andrzej Niwiński was using the name Książyk. Statistics sources (mojkrewni, futrega.org, nazwiska polskie, Baza Pesel) collect data about the frequency of every family name. According to these sources, less than 350 people are sharing the name Książyk in Poland. Our name Książyk ranks among the most uncommon Polish names. Nowak is the most common last name in Poland with more than 220,000 people. Regarding frequency rates, the name Książyk positions 128,989th in France.

From various statistics, there are less than 1,000 people born with the name Książyk in the world. The likely figure would be 700. The repartition is 50% in Poland, 50% abroad that includes 50% in the US, 40% in France and 10% elsewhere. Of course, this figure doesn't reflect the real number of members of the Książyk Community. An unknown number of "lost names" from misspelling should also be added. 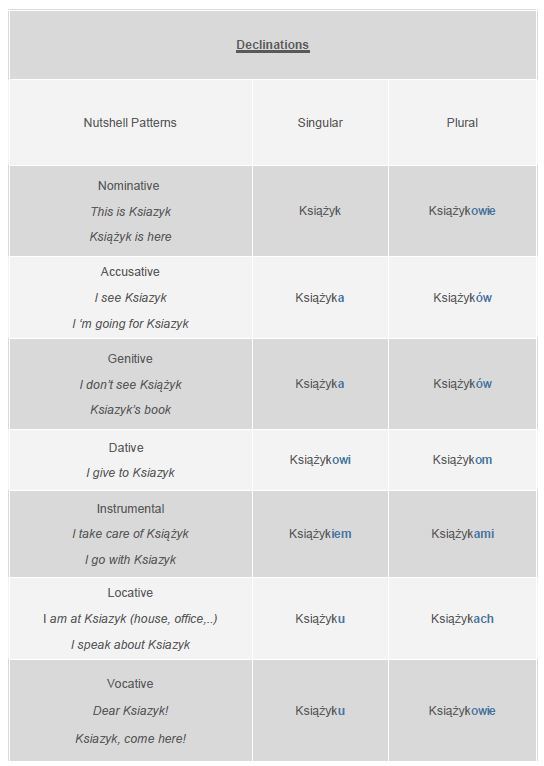 Remember your Latin classes? As for any other Polish last name, Książyk comes with declensions. For every situation, after some verbs and all the prepositions, the end of Książyk is altered. You might find your name Książyk written in one of the 10 different final inflexions according to the 7 cases on the chart below (click to enlarge). This is what makes learning Polish a grammar hell.

Moreover, in genealogy studies, you may find our name with the following plural forms:

The only good news is that there is no declension for ladies. Still, two formal forms might be used:

Declensions are a crucial point to keep in mind for your researches because there are 12 different ways to write your name Książyk. You might find one of these grammar alterations in any document.